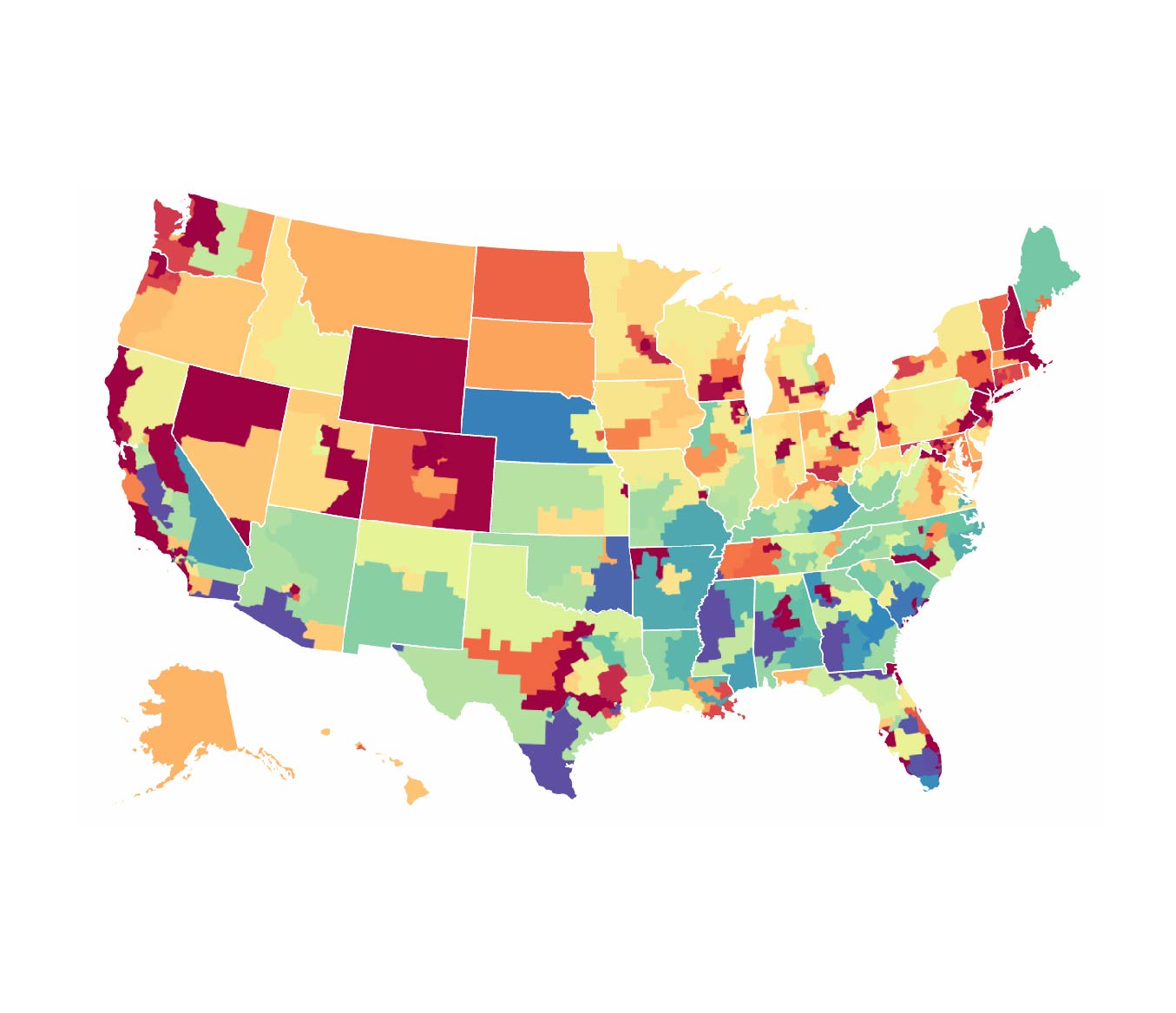 The tax proposals contained in the Biden administration’s fiscal year 2022 budget, including the American Families Plan (AFP) and American Jobs Plan (AJP), would levy $2.3 trillion in new taxes on high-income earners and businesses and provide $998 billion in refundable tax credits to low- and middle-income households, for a net tax increase of $1.3 trillion (conventionally estimated over the budget window, 2022 to 2031). The resulting redistribution of income would involve many winners and losers, not only across different types of taxpayers but also geographically across the country.

To illustrate the geographic distribution of these tax changes, the Tax Foundation has launched an interactive map that allows users to see average tax changes in their state and congressional district over the period 2022 to 2031. The analysis is based on our conventional revenue estimates at the national level mapped to congressional districts using IRS data on individual tax returns for 2018 (see the following methodology detail).

The map and Table 1 indicate Biden’s proposals would raise taxes on the average taxpayer in most states throughout 2022 to 2031, with the largest average tax increases per filer occurring in the District of Columbia, Massachusetts, Connecticut, and New York, with tax increases exceeding $1,000 per filer in 2022 and $2,000 per filer in 2031. Several states would get a tax cut in the early part of the budget window, including Mississippi, Alabama, Oklahoma, and New Mexico, with tax cuts exceeding $400 per filer in 2022, due primarily to the proposed temporary expansions of the child tax credit (CTC) through 2025. After 2025, every state and the District of Columbia would see a tax increase.

We estimate the geographic distribution of tax changes under Biden’s proposals using conventional revenue estimates at the national level generated by the Tax Foundation’s General Equilibrium Model which we then allocate to filers in congressional districts using data from the IRS Statistics of Income for individual tax returns in 2018. (Conventional revenue estimates do not include impacts on GDP and other economic aggregates.) The IRS data provides various tax characteristics broken down by congressional district (CD) and by nine classes of adjusted gross income (AGI), e.g., top category of $500,000 and above.

From the IRS data, certain tax characteristics are used to allocate to CDs the conventional national revenue estimates for each of Biden’s tax proposals, as described in Table 2, and then averaged by the number of filers in each CD. The accuracy of this analysis is limited by the extent of the IRS data at the CD level, particularly by the nine discrete AGI categories and top AGI category of $500,000 or more. For some of the proposals (for instance the increased capital gains tax), more accurate results could be reached by allocating the tax burden based on the earnings of those with an AGI of $1 million or more, but because the IRS groups everyone above $500,000 together, this is not possible. The impact of this approximation should not be significant as districts with a large number of taxpayers having an AGI of $500,000 or more are likely to have proportionally more taxpayers with an AGI of $1 million or more.

SALT break would erase most of House’s tax hikes for top 1%
What is the Cheapest Phone Service?
There’s only a few months left to sign up for advance child tax payments. Here’s what it means for future checks
Make effective use of third-party audit rights
These photos show SpaceX’s civilian Inspiration4 crew taking in the view from the massive window in orbit