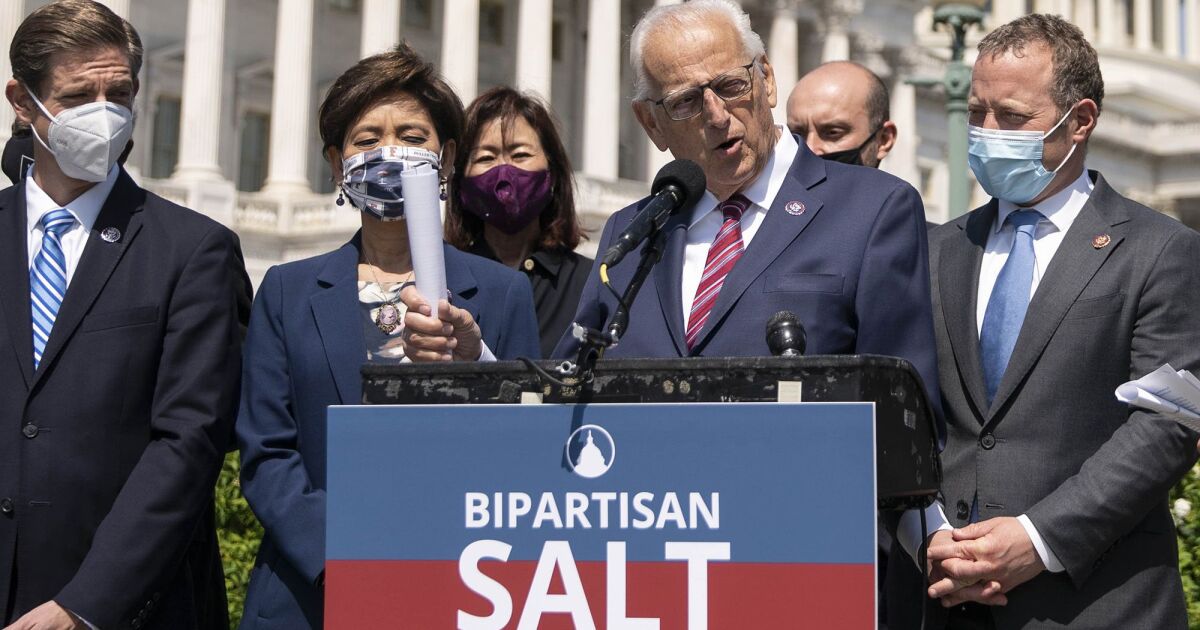 Call it the SALT effect: The debate over state and local tax deductions is scrambling U.S. politics, and the fight could have a profound effect on the parties as well as the U.S. economy.

Many Democrats from high-tax areas are demanding a repeal of the SALT cap instituted in the 2017 tax reform law. This is hardly surprising; they are simply looking out for their constituents. What’s striking is that progressives such as Representative Alexandria Ocasio-Cortez are open to the idea.

Put another way: Even as Democrats struggle to find ways to pay for one the largest pieces of progressive legislation in decades, some leading progressive members are willing to consider cutting taxes for families making over five times the median U.S. household income.

Meanwhile, many congressional Republicans are losing their appetite for entitlement cuts. They may not go as far as Donald Trump, who became president in part by saying he would not cut Social Security, Medicare or Medicaid. But Trump represents the base of the party more than anyone in Congress.

Some analysts have suggested that this is a natural consequence of the realignment in American politics. Democrats are increasingly the party of well-educated and well-heeled voters, while Republicans are gaining appeal among the White working class.

There is an even deeper dynamic at work here. From the 1970s until the early 2010s, long-run U.S. economic policy was dominated by the need to keep inflation pressures down and interest rates low. This required that the federal government keep the deficit in check, which left Congress with two broad choices — either raise taxes or reduce spending.

Members of Congress were rarely eager to take up the task. Nonetheless, the bipartisan consensus on its eventual necessity created two political inevitabilities. First, politicians had to take sides — did they favor spending cuts or tax increases? Second, the two positions became the defining difference between the two parties.

Over the last decade, however, this consensus has begun to break down. Democrats have promised to hold down middle-class taxes despite increases in social spending. Republicans have supported tax cuts but rebuffed efforts to rein in spending.

Making these positions possible were rock-bottom interest rates and inflation running persistently below the Federal Reserve’s target. If anything, the economy suffered from a deficit of demand from 2008 onward.

The question the U.S. faces now is what will happen if and when these basic fiscal tradeoffs reassert themselves. That hasn’t happened quite yet, but the current spark of inflation is a sign that a reckoning will come.

So how will it all turn out? One answer is that the parties will swap positions: An increasingly affluent Democratic Party will prioritize tax cuts, while an older and more rural Republican Party will become staunch defenders of Medicare and Medicaid. It’s logical enough, and the trends support it, but it seems too clever by half. The 20th century’s legacy of fiscal polarization cannot be undone in the space of a decade.

Another possibility is that the GOP will see a resurgence of support among affluent coastal urbanites, and Democrats will among the working class of the heartland. In effect, the parties will return to their previous trajectories. It may seem far-fetched, but as late the 2020 primaries, it was a still a foreseeable outcome. Then the Democrats nominated Joe Biden instead of Bernie Sanders.

That leaves a third possibility that seems unlikely but may actually be inevitable: a return to the bipartisan era of the mid-20th century.

An increasingly stark urban-rural divide will eventually force leaders in both parties to accept regular defections. There were some in the bipartisan infrastructure bill passed in August, which the Republican leadership did not oppose.

It seems perverse to say that rising polarization will lead to increasing bipartisanship. But Americans are not monolithic in their interests, making across-the-aisle cooperation the only way for legislators from solidly blue or red districts to serve the interests of their constituents. The only catch is that Congress has to be flexible enough to allow for this possibility — because the other two seem impossibly out of reach.